I photograph to celebrate life. For me, it is a form of worship.
I do no know who said this. Maybe I did. 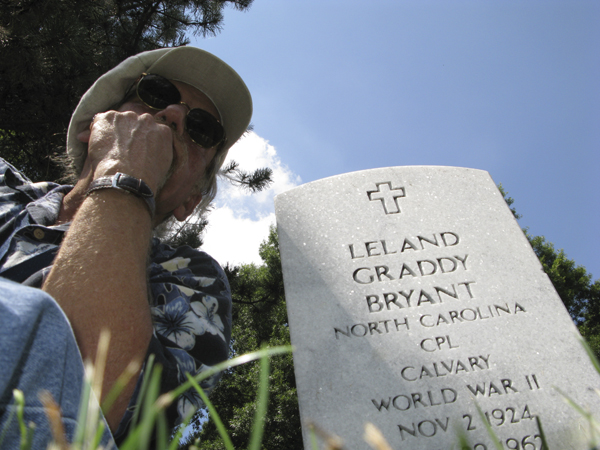 CALVARY - Father's Day 2018 For the first time in my memory, sixty years, I wanted to wish my Dad a Happy Father's Day. He and my Mom are buried together in Arlington National Cemetery up on a little hill under an oak tree. It's quiet and peaceful.

Fighting with the 8th Armored Cavalry in Germany, a bullet ripped off the back of his skull while attempting to pull some buddies from their burning tank. Unable to move his legs, he lay in his own blood and listened to the rest of them burn to death.

How many men had he killed? How many men did he hold as the light passed from their eyes and they passed from this place?  Could he feel the weight of each life and the lost possibilites  represented as it slipped through his fingers? I knew nothing of these thing until fifty yaears later.

He drank, he cursed and raged, he cried out in the middle of the night waving a loaded .45 caliber automatic at demons only he could see, monsters that he would always see. I remember very little of my childhood, only fear, tears and a constant pain in my belly.

I hated that man for the misery he caused my Mom and me and often wished him dead. On July 29, 1962 when I was twelve, he died. His best and probaly only friend said "He  just gave up living."

I felt great relief and a great guilt that I would know for the rest of my life. Isn't it a mortal sin to wish your father dead and have it happen? The VA doctors called it a heart attack. They did not mention the shrapnel floating around in his brain. His best and only friend, Al, who was with him when he passed, said that he "just quit his life." PTSD, witnessing the unspeakable, had locked him into his own private hell where he languished as an in-valid person untreated by the country he served until he expired. I did not know these things, either. He was just thirty-six years old.  How many thousands of combatants suffered.

I continued to hate my father for another forty-three years. His grandchildren grew up with a tainted image of a grandfather whom they could never know but through me and my pain and guilt.

The effects of this type of trauma are generational. His hell became ours. I drank and raged. My oldest son drank and raged and our loved ones suffered from the crime of neglect from a thankless nation.

In 2004, inspired by the work of the photographer, Jo Spence, I began to deconstruct the image of my father created and held close to my childhood pain. I looked at his photographs, listened to his voice in his recorded music and heard stories from adults who knew him. I was able to reconstruct in my heart the image of a man who did his best, did his duty, a man who at twenty-two years old was damaged beyond his country's desire to repair.  He lived with the shame of failure for another16 years, and "he just gave up on life.".

His pain became mine. As a grown man, I could step into it, wrap it about me and know who he must have been and feel his presence. He was no longer the monster created from horrific fear in a young child's mind. I could at last forgive him and forgive myself for years of hatred.

This year on Fathers' Day with the white stones marching away down into the little valley below, I was able to sit peacefully with my Mom and Dad for the first time in my memory. Gazing at their stone as if for the first time, the word Calvary chiseled into his headstone swam into clarity before my eyes. Was it a slip carried over 46 years to tell me something on this moment? How could I have not seen it before?

Calvary, Golgotha, the place of the supreme Christian sacrifice, Christ dead on his cross at 33 years.
Calvary, Arlington National Cemetery, my ultimate sacrifice, my Dad dead in his grave at 36 years.

I mourn his lost youth and my lost childhood  Some of the ghosts cleared from my heart that day..

Video: Faces of Your Grandfather'  I will attatch this short video soonl